Derek Jarman (1942-1994) is known as one of our most poetic and  anarchic film-makers and artists, as well as a prominent  gay rights activist. He started his career as a stage designer,  working as Ken Russell’s production designer for “The Devils” 1971.

Jarman’s early films were experimental Super 8mm shorts, a form he never entirely abandoned, developing further in his films Imagining October (1984), The Angelic Conversation(1985)The Last of England (1987) and The Garden (1990). In 1977 he made “Jubillee” which has been described as “Britain’s only decent  Punk Film” featuring punk figures Wayne County, Jordan, Toyah Willcox and Adam and The Ants.  It is  Caravaggio though that is probably Jarman’s most widely known film, in which he worked with actress Tilda Swinton for the first time.

Art Fund needed to raise £3.5m by 31 March 2020 to purchase Prospect Cottage and to establish a permanently funded programme to conserve and maintain the building, its contents and its garden for the future. More than 25years after his death, Prospect Cottage continues to be a site of pilgrimage for people from all over the world who come to be inspired by its stark beauty and Jarman’s legacy. The cottage and its contents were being sold following the death in 2018 of Keith Collins, Jarman’s close companion in his final years, to whom he bequeathed the cottage. Over 3,000 people have donated to the Art Fund’s campaign to save Prospect Cottage in its first two weeks.

“I first met Derek Jarman around 1984 when he was playing the part of Pier Paolo Pasolini in Julian Cole’s film, “Ostia”, which I was working on. A few years later in 1989 he asked me to art direct his film, The Garden, for which we initially shot various location scenes all over Dungeness, and around the relatively new garden at Prospect Cottage. This series of photographs are from this time and some show Derek filming with his Super 8mm camera wearing his distinctive blue overalls. Often they are lit by hand held marine distress flares. One scene referenced a dream where Derek was asleep in an iron bed cast out at sea at dawn, circled by five dervishes as the tide came in. Another had the film’s central Christ figure and Joseph pursued across the Ness by Balaclava wearing paparazzi in a frenzy of shutter clicking. These previously unseen photographs were taken as reference for a future shoot in a studio in London where we’d create similar tableaux against green screen however they now provide an insight into the unconventional way Derek worked when making his films and specifically show his freedom of expression when shooting at Dungeness.”

Ed Sykes’ unseen and unpublished photographs, record the day that Derek Jarman was “Cannonised” Sunday 22nd September 1991, in his garden at Prospect Cottage, surrounded by close friends and well wishers, he became “St  Derek of Dungeness of the Order of Celluliod Knights” Ed Sykes is a professional photographer whose work has appeared in Vogue, I-D, Dazed and Confused, The Guardian, The Independent, and the Sunday Times.

“Sunday 22nd September 1991 was a clear, crisp day highlighting the stark beauty of Prospect Cottage and the Dungeness peninsula. The shrouded figure of Derek Jarman, accompanied by The Sisters of Perpetual Indulgence, their habits billowing in the wind, made their way through the garden to an empty throne. It was here that St Derek was canonised surrounded by close friends in a ceremony full of warmth and love. From then on he became St Derek of the Order of Celluloid Knights of Dungeness.”

I left as the light faded and dimmed to make  felt a privilege to have been there and one of the most joyful days with a camera in my hand, during my early career in 1990’s.”

Richard Heslop has been making films since he bought his first super 8mm camera at the age of 12. He has made many music videos for bands such as New Order, The Smiths, Queen, Sinead O’Connor, and The Cure, and has won numerous awards.

Richard first met Derek Jarman in the mid 1980’s while working on a project with William Burroughs. Jarman had seen Richard’s work with 8mm film and got him to help out on 3 music videos for the Smiths. Later Jarman commissioned Richard to make “The Queen Is Dead” video and to be cameraman on his feature films “The Last of England” and “The Garden”.

The short film “Shooting the Hunter” will be  installed during the exhibition “I made the short film “Shooting the Hunter ” with Mark French” “It is centered around some footage I shot of Derek at work Directing his film THE GARDEN on which I worked as one of the cameramen. It is an invocation of his cottage and garden in Dungeness and of Derek himself who is so woven into the fabric of the landscape and cottage that we all are trying to save for future artists and people to experience. It’s dedicated to Derek with love. He was a friend and mentor and I still miss him to this day.”

Steve Pyke’s photographs of the garden at Prospect in Dungeness are a unique early vision shot in the Spring on 1986, while his portraits were shot in Jarman’s flat in London in 1983.

“I first met Derek at David Dawson’s loft at Butler’s Wharf, Wapping around 1981. I was just beginning a series of portraits of Film Directors and I arranged to photograph Derek at his flat in London. On the day of the shoot, the director Ron Peck (Nighthawks) was also there and I remember photographing the two of them together. The portrait  included here was photographed overlooking what was then St Martins School of Art in Charing Cross Rd. Derek was naturally very generous and he gave me a book of the work of Marcel Duchamp which I still treasure. We kept in touch and he later told me about a cottage he had just bought on the beach at Dungeness. By that time I had bought a flat on the beach in Hastings with my partner, the filmmaker, Nichola Bruce. We made our way over to see Derek at Prospect Cottage one sunny afternoon in the Spring of 86. It was early days for Derek there and the cottage, though a modest size, was an incredibly interesting and stimulating place. We had tea with him and  I remember on the walls were hung many of Derek’s paintings but also natural forms garnered from the beach. This first trip was before he had started landscaping his garden with the beach combed bones and wind twisted pieces of wood.  There were seakale and dog rose, borage, sage and I remember yellow poppies.  We went again a year or so later with our newborn son Jack, Derek was ill with the flu but was as always very welcoming and we all had tea outside in the sun.  The garden had changed, and had much more of Derek in it….distorted pieces of metal placed amongst the twisted pieces of wood, it was incredibly beautiful. We were always very careful not to just turn up or seem to encroach on his space, it always seemed to me a very private place of solitude for Derek.” 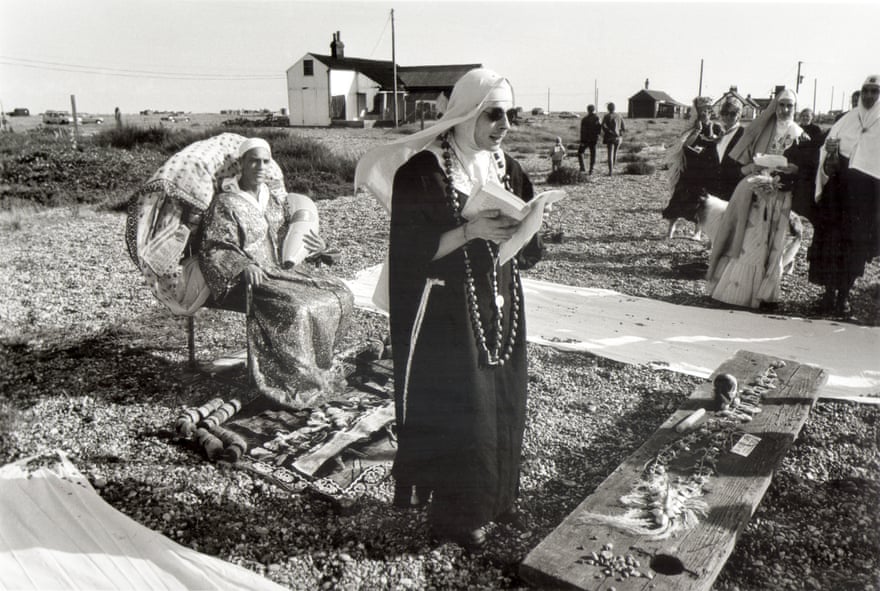 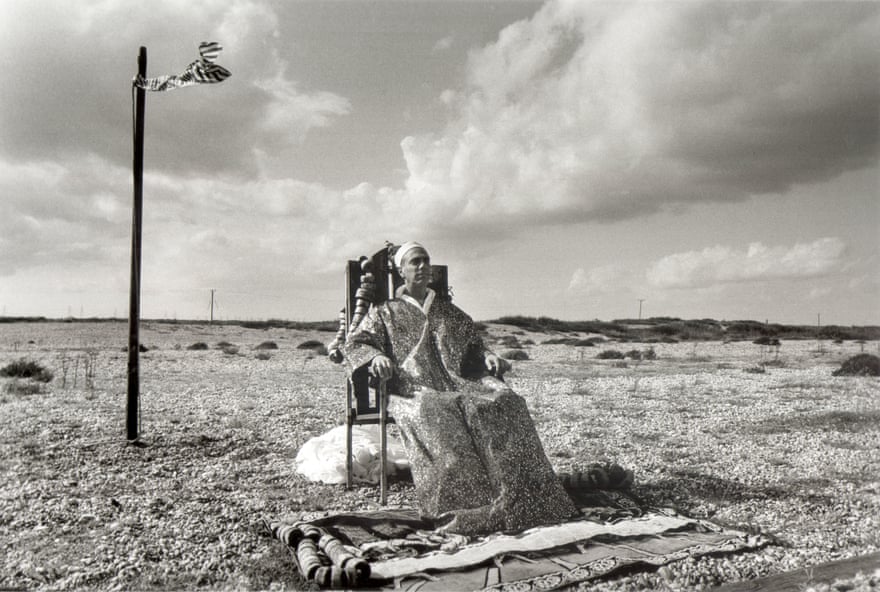 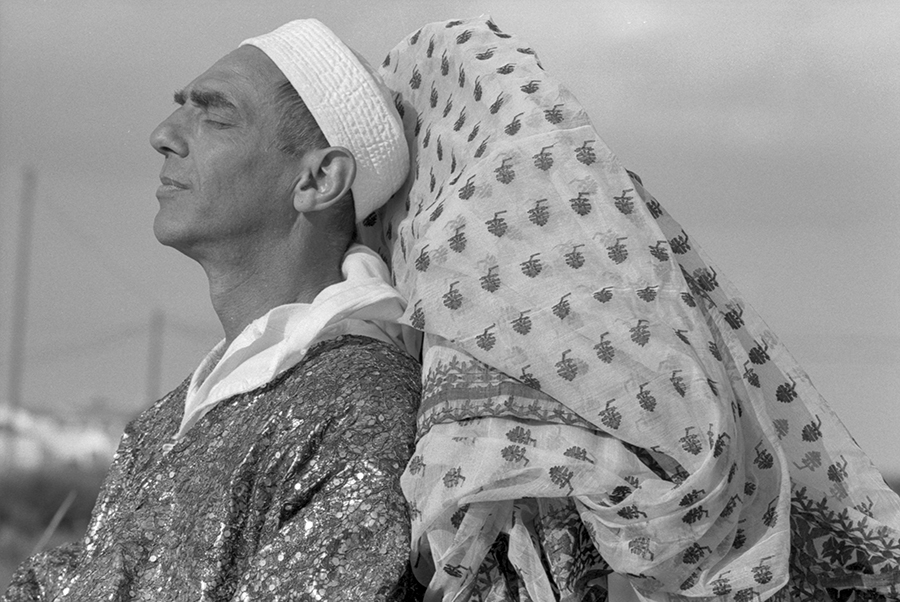 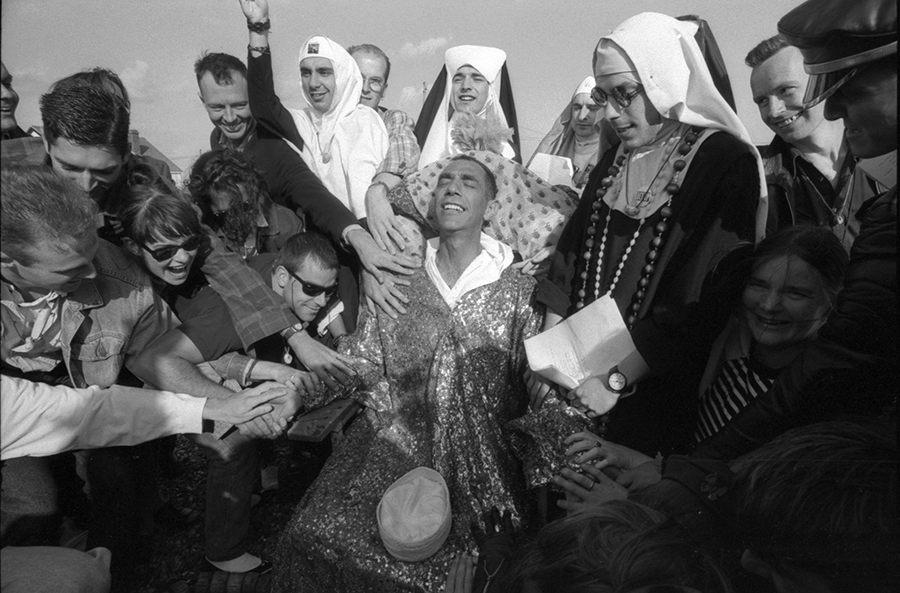 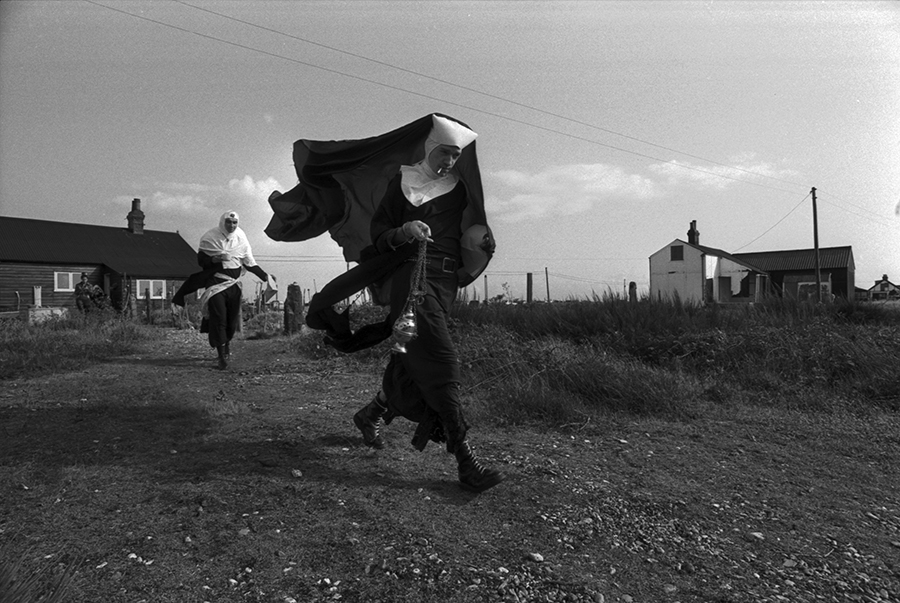 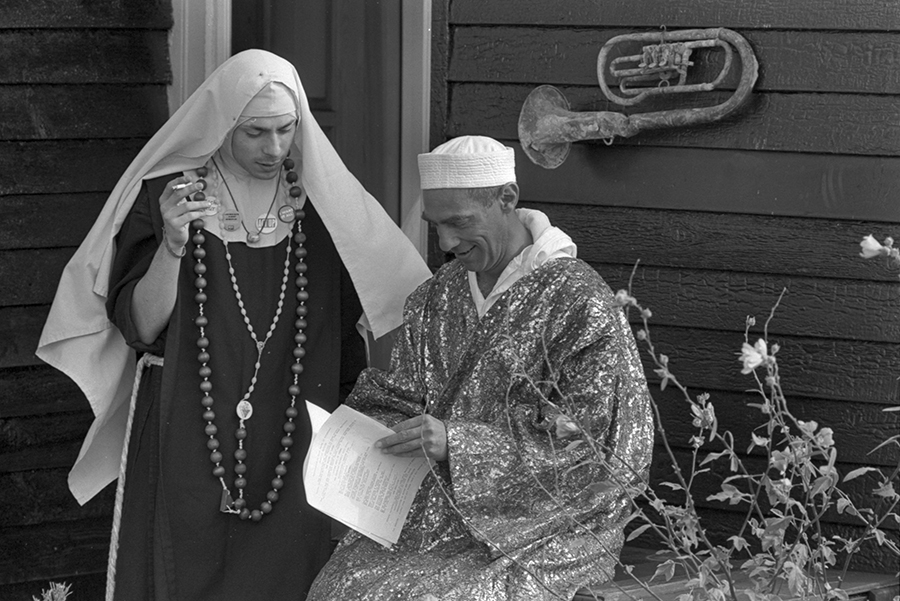 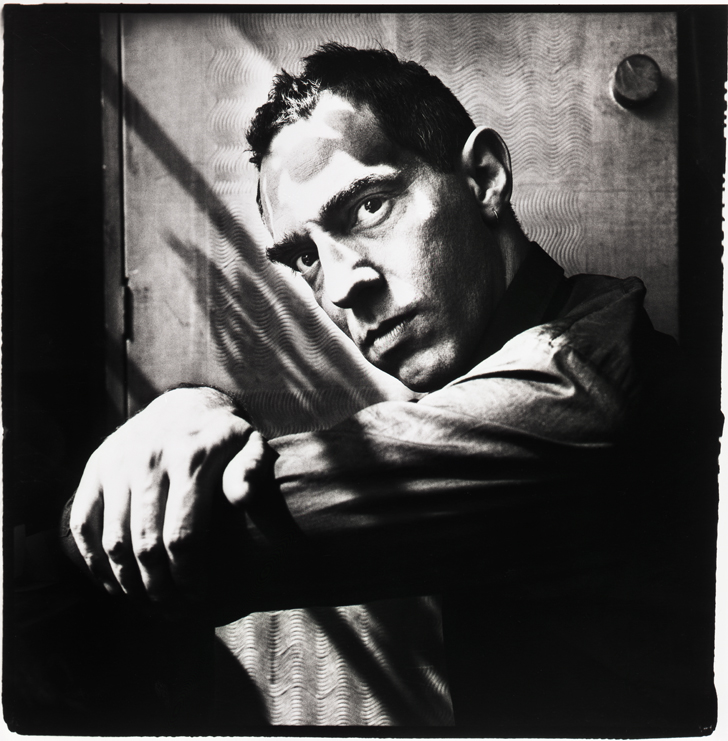 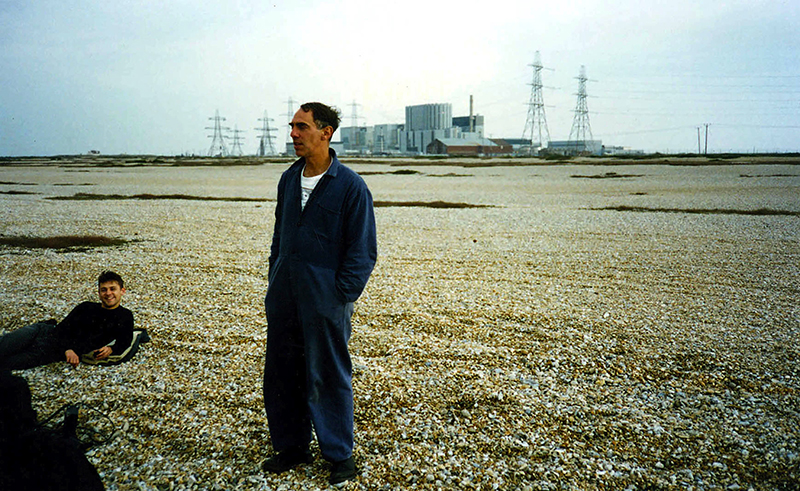 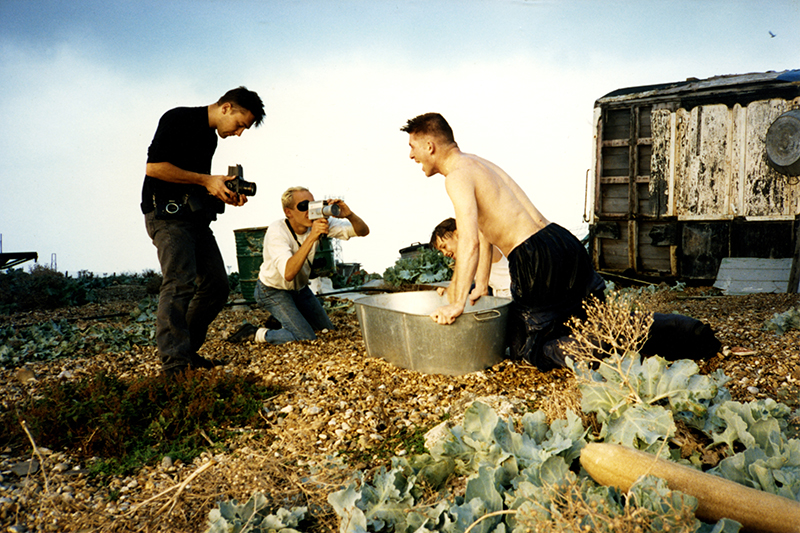 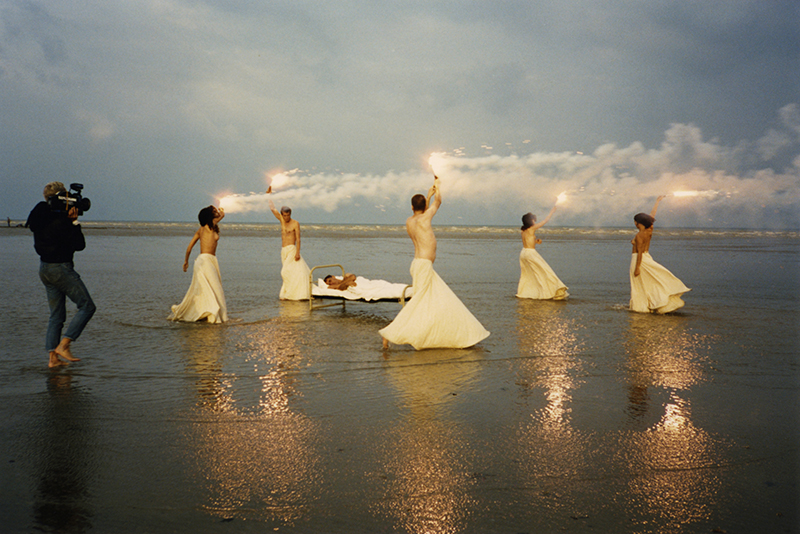 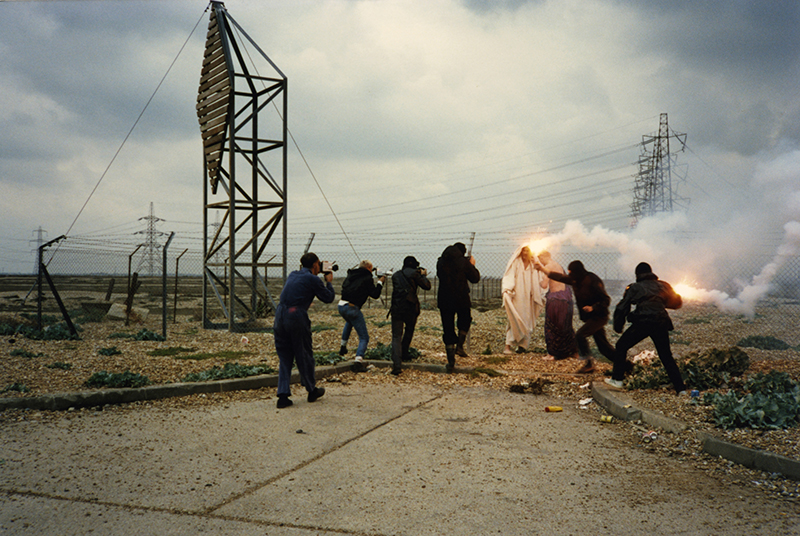 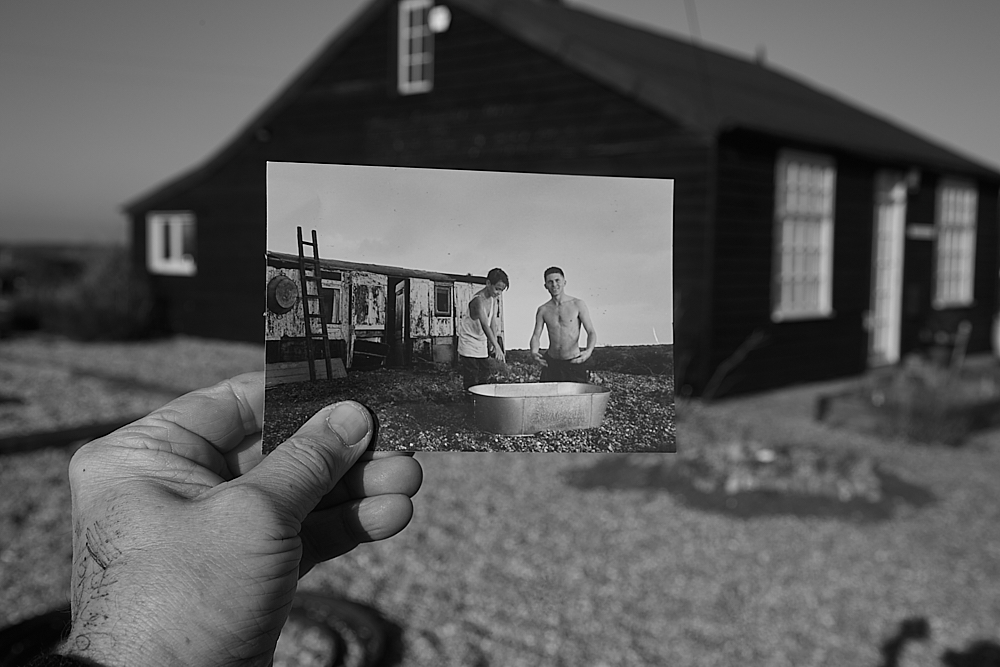 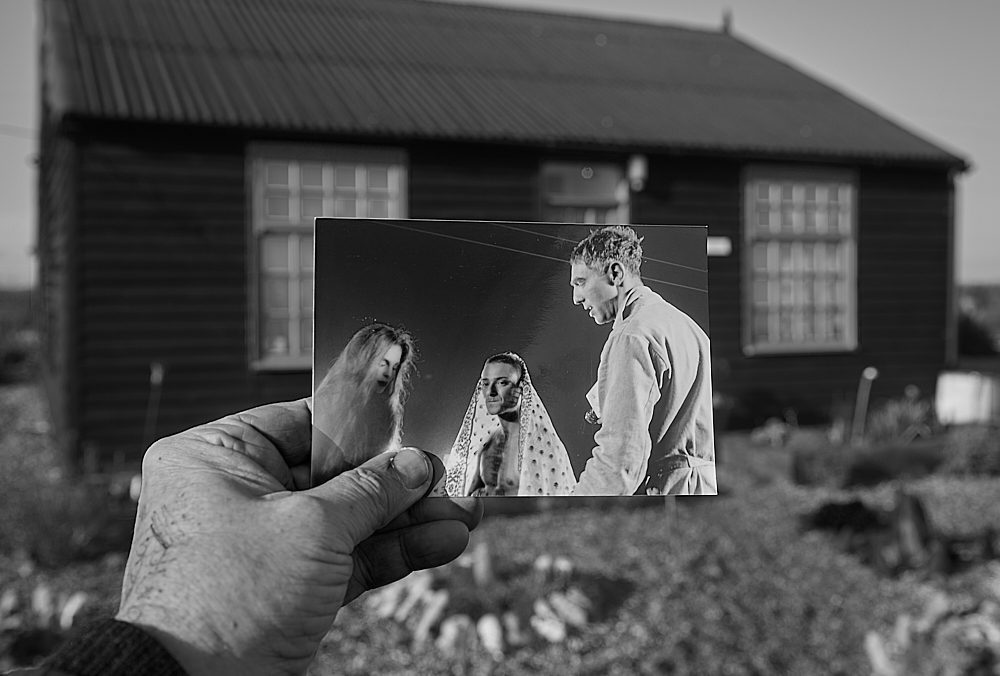 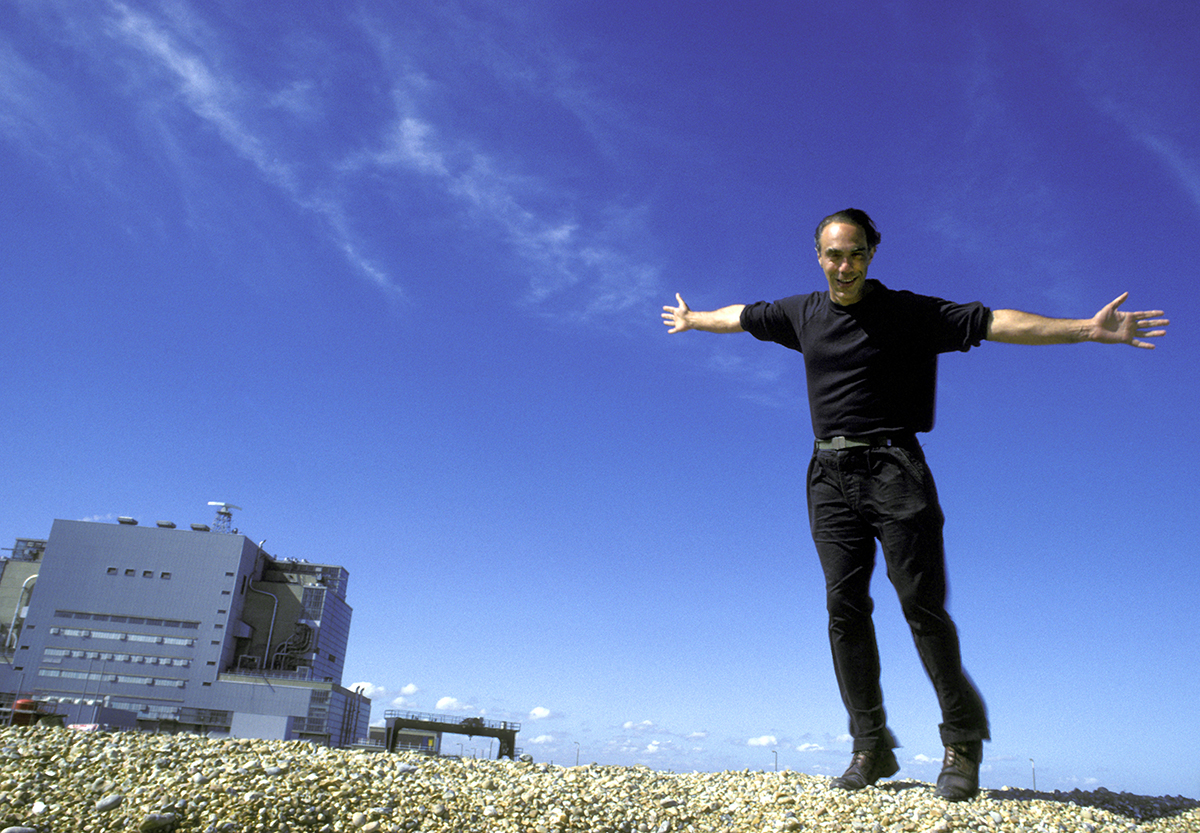 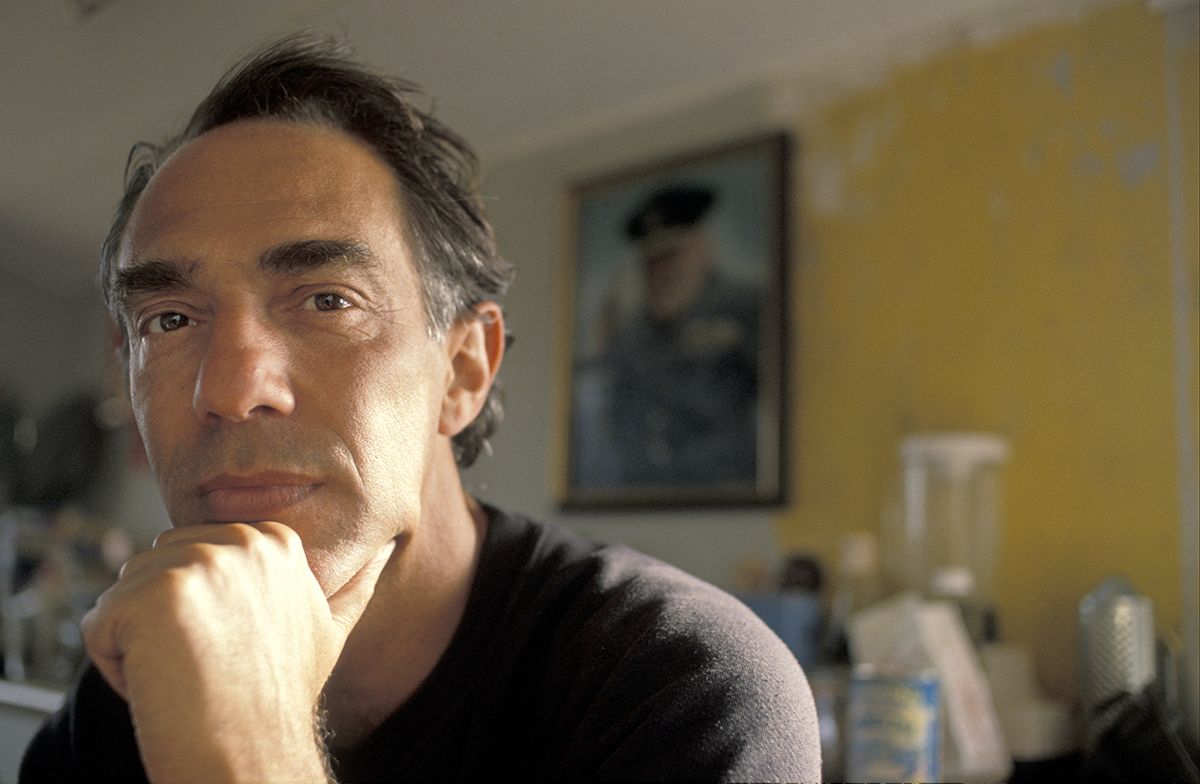 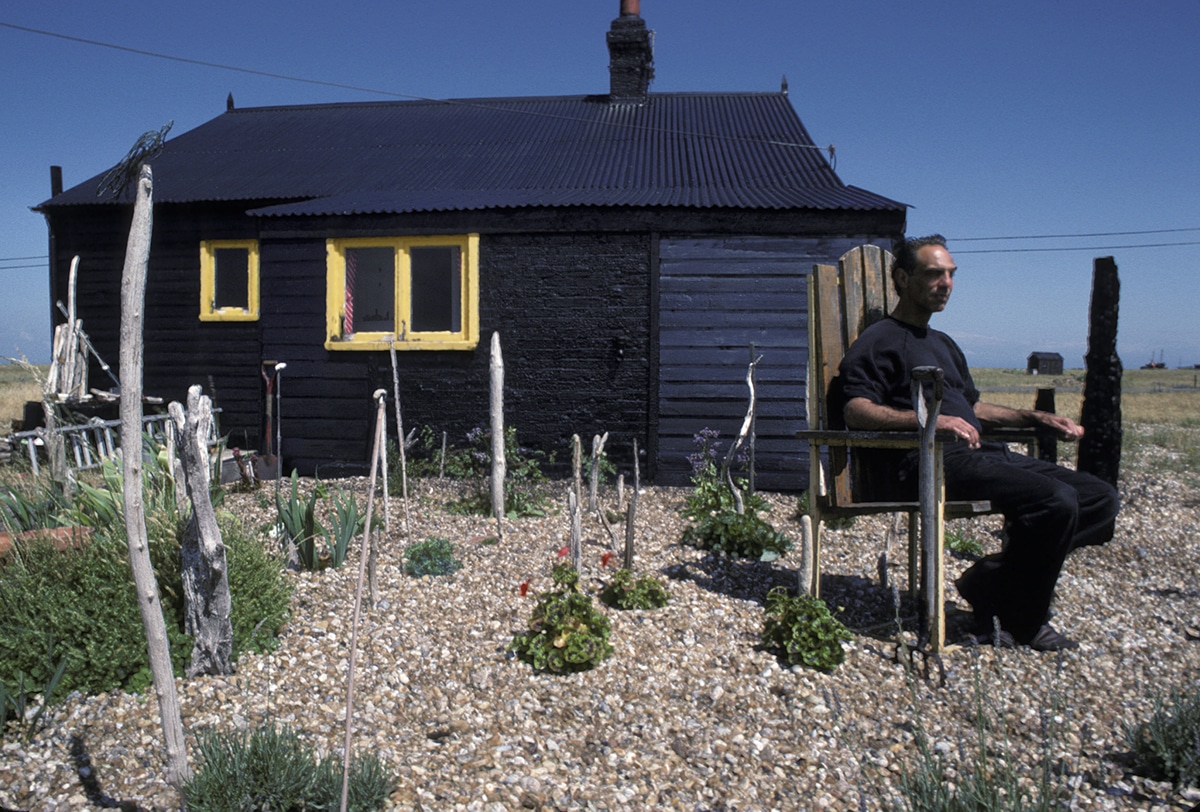 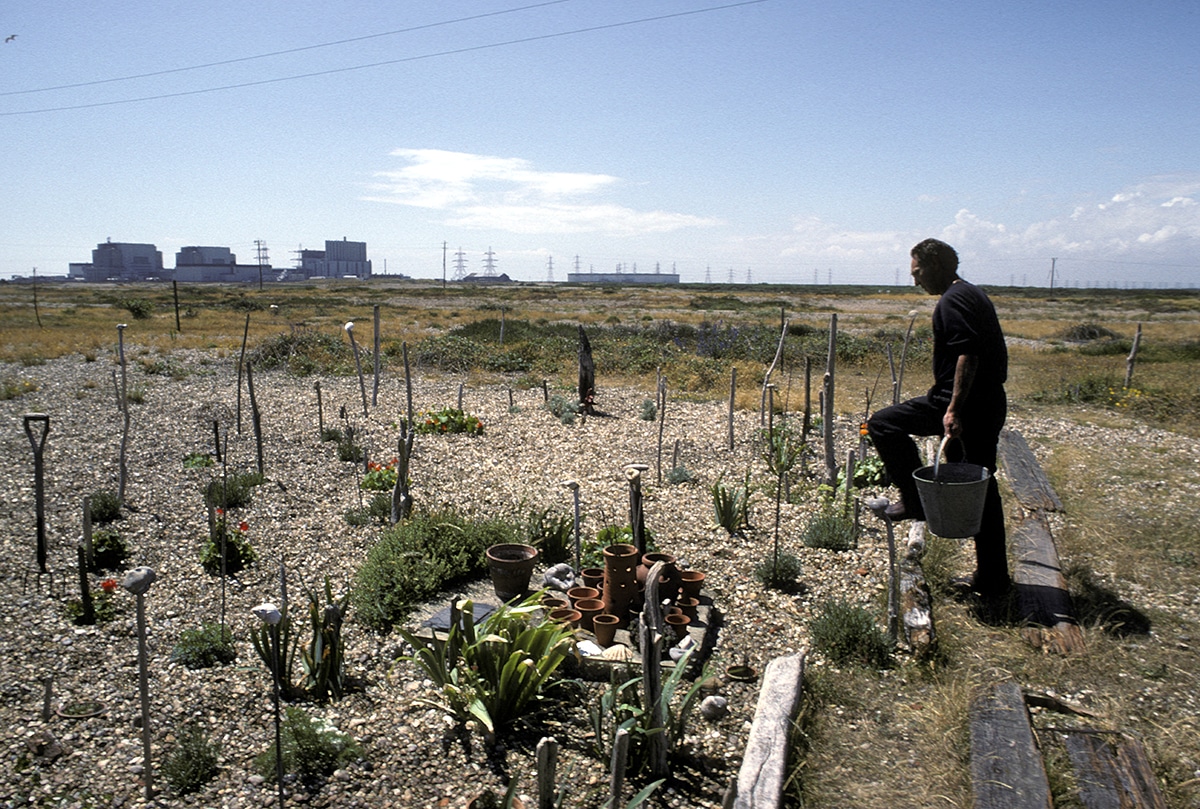 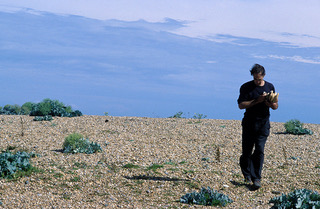 John Cole – Derek Jarman on the Beach at Dungeness, 1988 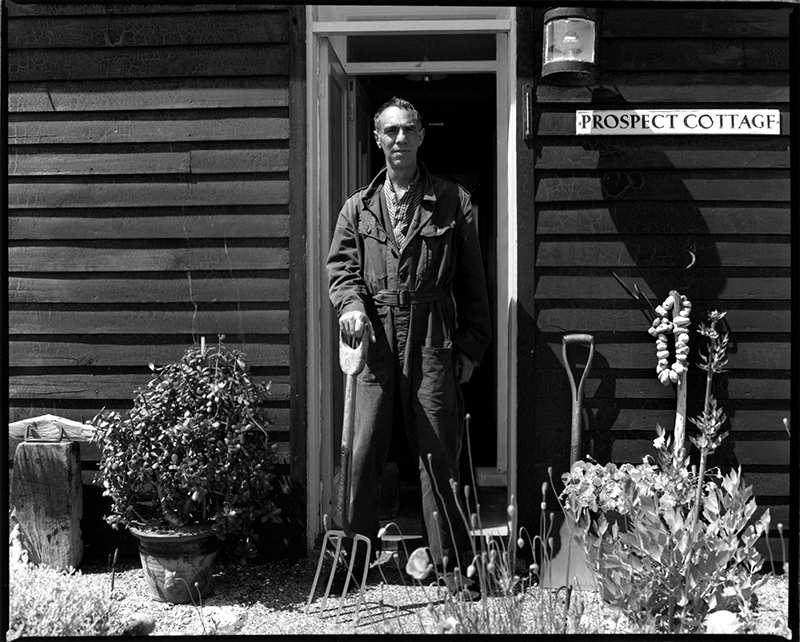 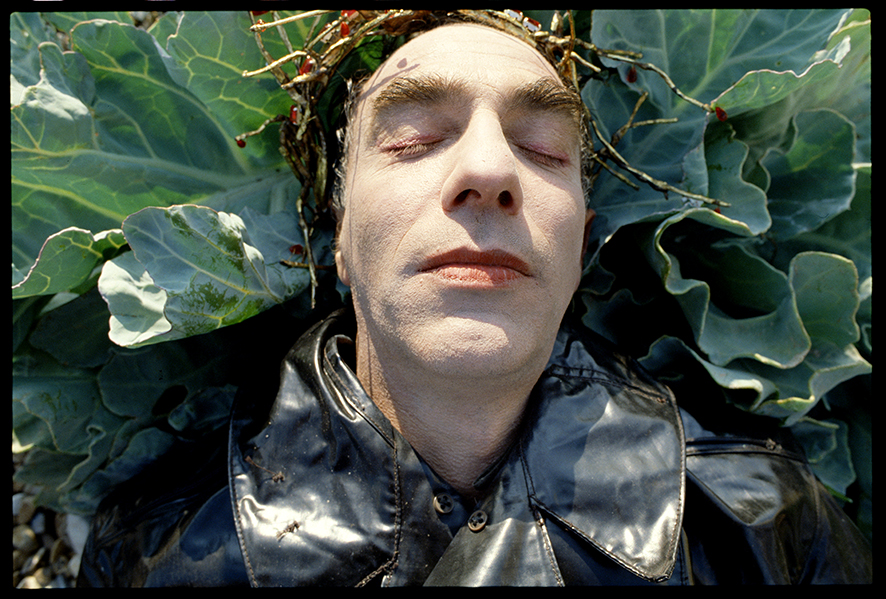 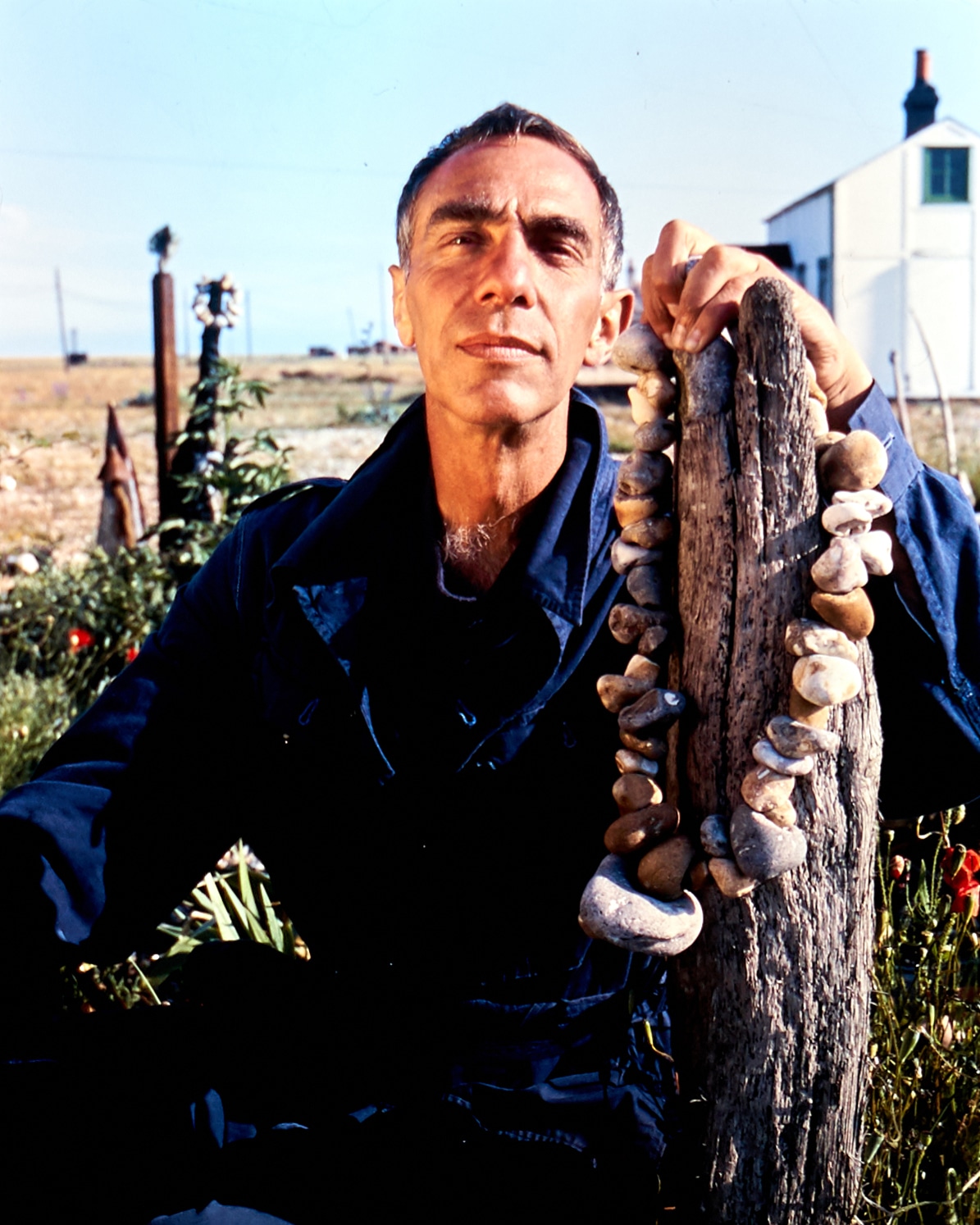