Through The Eyes of Lee Milller

Photographer Lee Miller (1907-1977) started out as a fashion model in 1920’s New York. By the end of that decade she had apprenticed herself to the surrealist artist and photographer Man Ray, in Paris. Together they re-discovered the photographic technique of solarisation and Miller became part of the surrealist movement; noted for her witty and humorous images.

Among her circle were Paul Eluard, Jean Cocteau and Charlie Chaplin, but by 1932 Miller had left Man Ray and set up her own photographic studio back in New York.

However, less than two years later she abandoned her successful practice to marry Egyptian businessman Aziz Eloui Bey. Now supported by her wealthy husband she had no need for professional commissioned work, this period becomes the highlight of her personal photography, which includes A Portrait of Space, this is now regarded by many as some of her most successful surrealist work and is intensely interesting part of Miller’s photographic repertoire, as the images she captures are without restraint in the form of a commissioning brief.

Bored of the stuffy life of an upper-class ex-patriot in Cairo, by 1937 Miller had returned to Paris where she met British Surrealist artist Roland Penrose, but it was the outbreak of the WWII that was to change her life. Working as a freelance photographer for Vogue Magazine, and then in 1943, as a US war correspondent she covered the London blitz, liberation of Paris and the horrors of Buchenwald and Dachau concentration camps.

Miller was the only female war correspondent to cover combat in Europe in WWII.After returning to Britain, welcomed back as a celebrity, Miller found her war experiences too painful and she soon started to suffer post-traumatic stress disorder. In 1947 she married Penrose and shortly after birth to her only child, Antony. The family settled at Farley Farm House in Chiddingly, East Sussex, in 1949 which then became an artistic Mecca throughout the 50s, 60s and 70’s , welcoming Picasso, Man Ray, Henry Moore, Eileen Agar, Joan Miro, Jean Dubuffet, Dorothea Tanning and Max Ernst amongst others through its doors.

While Miller did the occasional photo shoot for Vogue she soon swapped the studio for the kitchen, becoming a successful gourmet cook, only rarely taking out her camera to record family occasions and the visits of their friends. Miller died from cancer in 1977 aged 70. Throughout her life Miller did little self-promotion and that her work is known today is mainly due to the efforts of her son, Antony Penrose, who has been studying, conserving, and promoting his mother’s work since the early 1980s.A chance find shortly after Lee Millers death in 1977, of a box of negatives in the attic at Farley Farm House led to the unearthing of Miller’s life and work, while a simultaneous series of events brought Carole Callow to the farmhouse, where she became sole printer to the newly discovered archive.

Shortly after, more boxes of negatives arrived from Vogue’s offices in London and the archiving began to take shape.Lee Miller was an outstanding printer and the existing vintage prints enabled Callow and the Penrose family to translate her work as she would have produced it herself, true to her vision.** This exhibition celebrates the 30 years of Carole Callow’s print and archival work. She is perhaps the only person with such an intense and intimate understanding of this aspect of Lee Miller’s work.

With fascinating insight Callow recalls: “For the first two years I spent many hours in Antony’s tiny darkroom bringing Lee’s images back to life. With each new contact print the feeling grew that Lee herself was looking over my work and guiding me, yet at the same time permitting me to discover the essence of Lee herself through her photography.”“The images before my eyes were of unseen 1930s fashion and portraiture from her days in Paris and New York, pre-war Egypt, Europe and the Balkans, as well as portraits of celebrities and surrealist artists many of whom were Lee’s close friends. Lee’s legacy includes many wartime images, notably the death camps at Buchenwald and Dachau. In order to print these images of horror I had to detach myself emotionally from their content.”

The first is Picasso’s Gaze, which explores Millers’ relationship with Picasso from 1937-1963. For the second part of the exhibition Callow has chosen images taken at Farley Farm House of some of its famous guests and Sussex Life.

Antony Penrose says: “The present day high appreciation of Lee Miller’s photography owes much to the work of Carole Callow. As a fine printer Carole has consistently interpreted my mother’s work in a way that echoes Lee Miller’s own eye and her own choices. This has been achieved by the extraordinary diligence Carole used in her researches into Lee’s techniques and her style and the meticulous manner in which the prints are made”.“When she is in the darkroom there is a Zen like atmosphere. She will not be hurried, she will not be interrupted. Nothing is allowed to break the intense concentration that goes into producing faultless gelatine silver prints, sometimes of images that she has over the years helped to make widely known. Carole and I have collaborated for more than 30 years, and it has been so pleasing to see her receive international acknowledgement as a leading fine printer.” 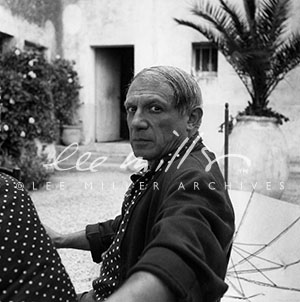 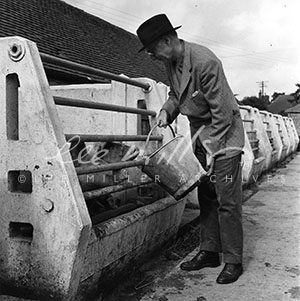 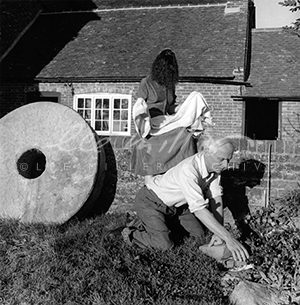 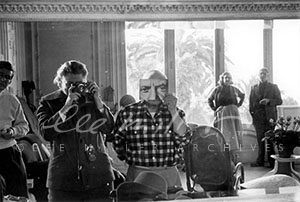 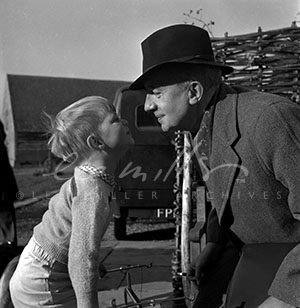 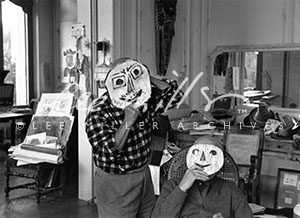 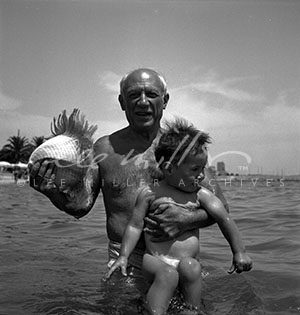 Lee Miller – Picasso in the sea